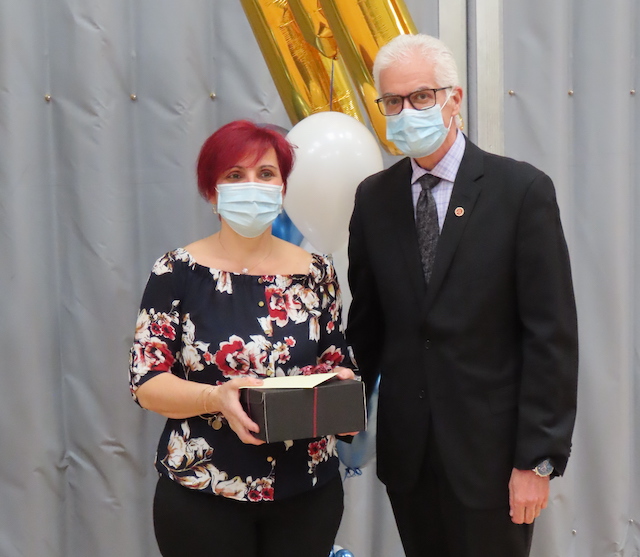 The annual EMSB Parent Volunteer Appreciation Evening took place   virtually this year during National Volunteer Week, which ran from April 18 to 24, under the theme of “Working Together: Meeting the Challenge.” You can access the program at https://youtu.be/ZVcqoSnm_yI

Ambassador of  The Year

Jamie Orchard is this year’s Ambassador of the Year. She recently concluded a distinguished 23 year career with Global TV, where she served as senior anchor and news editor for the evening news.  She previously covered the news in Montreal for CTV and CBC. Recently she launched The Second Act Project (SAP), a blog that offers a safe space filled with inspiring stories of courage, compassion and kindness. You can see it at www.thesecondactproject.ca

With Jamie as anchor, The Global Evening News was named Best Newscast in Eastern Canada by the Radio/Television News Directors Association in 2007 and earned the award for best breaking news coverage in 2006. In 2004, she was named one of city's most remarkable women by the Board of Trade of Montreal and was a finalist for the YWCA Women of Distinction in 2007. An active volunteer, in 2008 she won the Izzy Asper Community Service Award for her work with the Action Centre, an organization that provides help for physically and mentally challenged Montrealers.

Since the inception of the EMSB’s Volunteer Appreciation Evening, Jamie has been a regular co-emcee. “Jamie also had a strong presence at our schools, not only as the parent of two students, but in front of the camera,” commented EMSB Chair Joe Ortona. “We thank her for all of the contributions she has made to us over the years.”

The Volunteer of Distinction for this year is Mary Nitti from Pierre Elliott Trudeau Elementary School in Rosemount, who for the past 21 years continues to volunteer her time, energy and creative talents to enhance the school.  Mary, is a loyal, devoted and hard working woman. She is the heart of the school. Over the years, Mary has helped students, parents, and staff members.

For the 12th consecutive year, La Capitale was the title sponsor for this event. La Capitale Financial Services (www.lacapitale.com), which is a member of La Capitale Financial Group, offers a wide range of products and services that are designed to simplify financial choices for members working in the public and par public sectors in over 900 public and par public institutions across the province.  These services include: personal financial advice; savings, investments and funds; individual life and health insurance; mortgages and personal loans; insurance for automobiles, recreational vehicles, home, travel and legal access; commercial insurance; and group insurance.

As a proud sponsor of our 2021 EMSB Virtual Volunteer Appreciation Evening, Joseph Mantagaris of 21st Century Food would like to say thank you to the entire EMSB teaching community by offering his Gourmet Home Meal Delivery Service at 25 percent off.

This year’s Virtual event included recognition of all volunteers, notably those with five years of service or more. There were formal presentations for Jamie Orchard, Mary Nitti, remarks by Mr. Ortona, Interim Director General Pela Nickoletopoulos, Parents Committee Chair Caleigh Saucier and Mikael Alam from La Capitale and some student musical performances from the students at FACE School.

The Roles of a Parent Volunteer in Pandemic Times

The COVID-19 pandemic has naturally curtailed the traditional volunteer activities at schools.

Instead of lunch buffets served by parents for teachers and staff during Teacher Appreciation Week, it was lovingly assembled individually boxed lunches, or gifts and cards delivered to the school.  Rather than convening in the staff lunchroom for monthly Home and School meetings, it has been sitting at the kitchen table after dinner to meet via videoconferencing. What stands out in the parent volunteer community this pandemic year is the heartfelt will to continue to help out and stay connected with their children’s schools.

Principal of Leonardo Da Vinci Academy elementary school in Rivière-des-Prairies, Nadia Sammarco, says it’s really a matter of thinking outside the box. For example, the festive and popular “Breakfast with Santa,” where some 25 parents would normally be on hand to serve breakfast to large groups of children, was adapted so that individually boxed breakfasts could be brought to classrooms, while music played on a cart wheeled down the hallway. And there was even Santa, who made a surprise appearance in each classroom doorway.”

Please stay tuned to our website and the next edition of the EMSB Express for Kristin McNeill’s comprehensive look at volunteerism during the pandemic and a comprehensive recap of our Virtual event.